Posted by NOP at 5:03 PM No comments: Links to this post

Email ThisBlogThis!Share to TwitterShare to FacebookShare to Pinterest
Labels: videos

Posted by NOP at 8:51 PM No comments: Links to this post

“We are supposed to preserve and protect life among our patients but how can we do this when privatization of health service becomes the centrepiece program of the PNoy government?”, asked Benjamin Santos Jr., All UP Workers Union-Manila President during a protest action conducted by the health workers and patients outside the Out-patient Department (OPD) of the Philippine General Hospital (PGH) today. 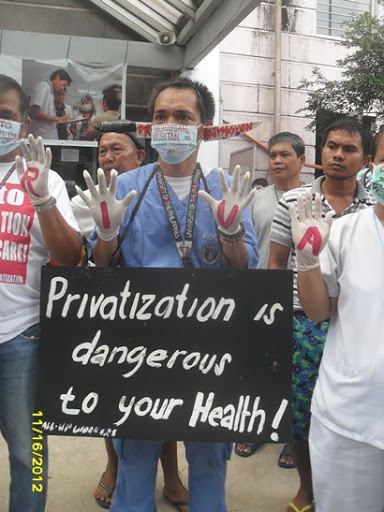 In the protest action, Santos asserted that Article II, Sec 15 of the 1987 Philippine Constitution explicitly states that “The State shall protect and promote health of the people and instil health consciousness among them”. but with privatization of health facilities and services, the health of our Filipino countrymen is threatened because privatization kills.

A known ‘Ospital ng ‘Bayan, PGH implemented privatization schemes as seen by the establishment of UPMC-FMAB, a private facility within PGH. Besides accommodating the doctors clinic, the private facility also has a pharmacy, laboratory and other diagnostic service and renders out-patient surgeries. When laboratory equipments are not functioning and supplies are not available at PGH, patients are adviced to proceed to this private institution for their laboratory and diagnostic needs where fees are much higher compared even with other private laboratories outside of the hospital. Most often, patients are forced to come to this private facility to avoid the long and tedious wait of the services of PGH. Therefore, UPMC-FMAB profited from PGH inadequacies.

Lately, amidst strong protests from the All UP Workers Union, other health workers and patients, the University of the Philippines Board of Regents (UP-BOR) approved the scrapping of the ‘No Charge/NC’ rates for the laboratory and diagnostic procedures availed by a meager 11% Class D/indigent patients of the hospital after a strong recommendation from PGH Director Jose Gonzales.

“This revenue enhancement scheme is but a form of privatization”, Santos stressed. “UP and PGH resorted to this method to augment the hospital’s insufficient budget and to attain fiscal autonomy as expected of them from the PNoy government. PNoy’s government does not mean meaningful service to the Filipinos. It is not just reasonable to extract and squeeze more money from the poor, much more from the most poor. Health is a basic human right and PNoy should stand to that!, ” Santos added.

All UP Workers Union-Manila also denounce the corporatization of 26 public hospitals as this scheme would lead to privatization, the heart of PNoy’s Universal Health Care Program that runs under his Public-Private Partnership program, a condition set and dictated by International Financial Institutions. The union finds privatization as PNoy’s complete disregard of the people’s right to health and so it urges everyone to fight and oppose this unjust and anti-people policy.### 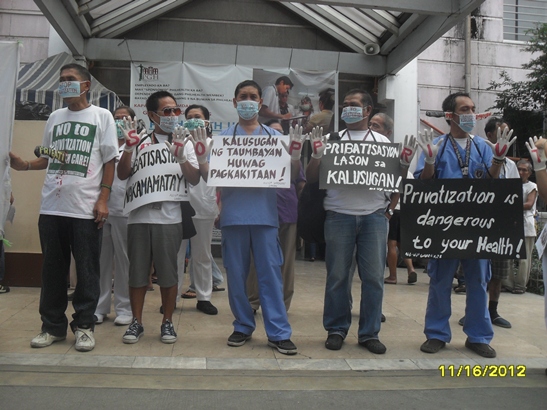 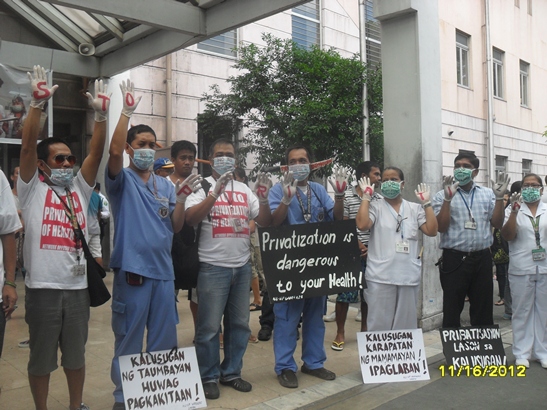 Posted by NOP at 8:12 PM No comments: Links to this post