Protests against Privatization of Government Hospitals

Health workers and community residents held a protest action in front of the Department of Health in Manila during the groundbreaking ceremony of the “new” Fabella Hospital on June 25, 2013. Fabella, Jose Reyes, and San Lazaro Hospitals are to be “modernized” under the public private partnership and corporatization projects of the government. 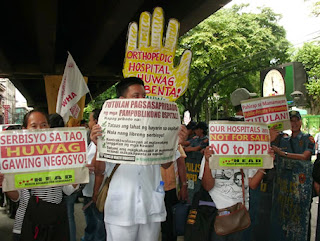 Pres. Benigno Aquino III who was the guest of the groundbreaking ceremony praised the Department of Health for its privatization measure. Meanwhile, protesters who rallied outside the DOH compound raised concerns on the rising costs of health services in public hospitals and the accessibility of health services for poor patients.

“We believe it is the responsibility of the government to improve, develop and modernize public hospitals and public services health services. This should serve the people’s interest, not the interests of profit-oriented private investors,” said Leopoldo Margallo, a nurse at the San Lazaro Hospital.

According to the Alliance of Health Workers, six bidders participated in the June 11 public bidding for the construction of the new Fabella Hospital. Fabella, a 700-bed hospital in its current location, will be transformed in a LRT facillity. The new Fabella hospital at the DOH compound is intended only for 400 patients.

Repost from CHD Philippines
Posted by NOP at 8:38 AM No comments: Links to this post