Dubbing the approval of the modernization of Philippine Orthopedic Center (POC) as "done like a thief in the night", indignant hospital workers held protest action today in Quezon City against the National Economic Development Authority (NEDA) Boards's approval of POC 'modernization' project. 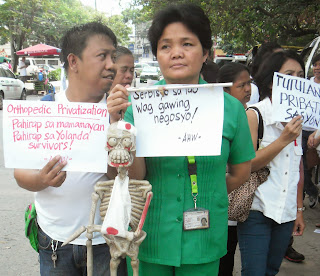 Antonio claimed the privatization of the only public orthopedic hospital in the country will affect typhoon Yolanda survivors and all poor Filipinos who depend on POC for treatment. The health workers opposed the POC public-private partnership project as it displace several hundreds of poor patients who are depending on the free services presently provided by POC. The 700-bed orthopedic hospital to be built by the winning private investor-bidder inside the National Kidney and Transplant Institute compound will only provide 70 beds for indigent patients based on bid documents released by the Department of Health.

POC hospital workers earlier trooped to the NEDA office in Pasig on November 13 based on news reports of NEDA Board meeting. In an appeal letter addressed to NEDA Director General Arsenio M. Balisacan, the health workers urged Balisacan and the NEDA Board "to have a heart for the poor, especially during this difficult and trying time...by not allowing the approval of the 'modernization project' of the POC".

The NEDA Board headed by President Benigno Aquino III approved the P5.6B 'modernization' of POC along with six other major projects during the NEDA Board meeting on November 21.

Philippine Orthopedic Center hospital workers trrop anew to the National Economic Development Authority (NEDA) today in Pasig City as NEDA Board is set to discuss and approve the modernization project of the country's only public hospital treating bone-related conditions.

"We appeal to NEDA Board, on behalf of the poor Filipino patients in POC, to have a heart for the poor, especially during this difficult and trying time we Filipinos are undergoing. The approval of the Public Private Partnership of the POC will jeopardize the interests of our poor patients who come to POC because they are so poor to afford private or privatized hospital", said Sean Velchez, president of the National Orthopedic Hospital Workers' Union - Alliance of Health Workers (NOHWU-AHW).

The protesters also lashed out at the Aquino government for pursuing privatization of the hospital amid the disaster wrought by Typhoon Yolanda.

"While the entire country is grieving and trying to recover from this worst disasterm the Aquino government in all its callousness and insensitivity pushes through with the privatization of POC. What greater blow can an insensitive government give to the suffering people than privatizing the only public orthopedic hospital where the poor run for treatment?", lamented Velchez.

The hospital workers urged the government to instead prioritize people's welfare by scrapping altogether the privatization of the public hospitals and focus its time and resources to repair and recontruct public hospitals in typhoon affected areas. This will benefit not only the typhoon survivors but also other poor Filipinos.

POC hospital workers and other workers under AHW, for their part, have started relief efforts to help typhoon survivors and affected health workers in the Visayas.
Posted by NOP at 4:25 PM No comments: Links to this post